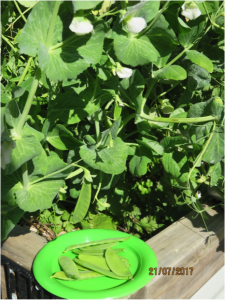 Our Mammoth melting snow peas were planted at the end of February as seeds.

They lived up to their name, Mammoth melting Snow peas, by growing 1.8m high on a purpose built trellis. Some were planted with just a tomato cage to support them. This worked, but those plants didn’t grow as big and produced less snow peas. The snow peas fell over the top and down the sides on both the tomato cage and the trellis. It took about 2.5 months to get our first snow peas.

We grew one row 2.4m long with about 15 plants in it for our family of 5. Plus another 4 in tomato cages. Every snow pea has been eaten in a flash. We never had a surplus!

Their location was out in the open with full sun and wind from all sides. Our crop last year was ruined by downy mildew, but this year they were an outstanding success. Only a few times have they made it to the kitchen to be added to a stir fry or salad. They usually are gobbled up on the spot between our family and visitors. Five months from planting we are still harvesting snow peas and harvesting seeds as some of the plants have now died off.

Saving seeds for next year is important, but proved very tricky with such a delicious plant! We resorted to writing “seed” on the pods I wanted to keep, but even then some were still eaten! All visitors had to get an explanation on not eating the fat ones to save some seeds! 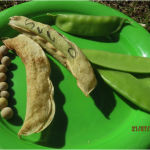 On the left are dried seeds ready for saving.  In the middle, a snow pea with seeds growing.   On the right snow peas as you would normally eat them. Yum!