Plant of the Month: Bananas 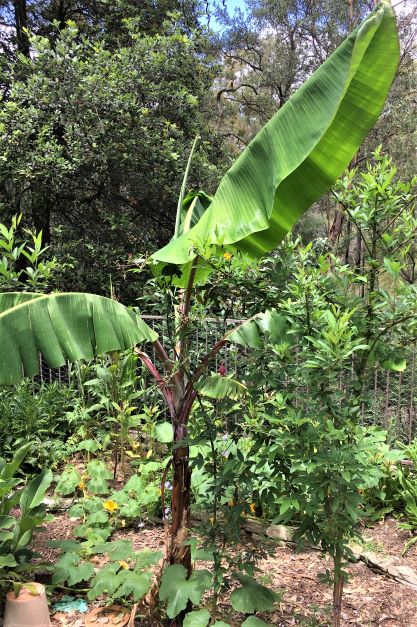 Although sometimes referred to as ‘trees’, banana plants (Musa species) are actually herbaceous perennials: herbs, distantly related related to ginger. A tree forms a woody stem, banana plants never do. Instead they form ‘pseudo-stems’ that grow from an underground corm. After fruiting, the pseudo-stem dies but the corm remains alive, sometimes for decades, producing one or more pseudo-stems.1 A single banana is a fruit; however breeding has led to the seeds being little more than black specks and completely sterile.2

Bananas are believed to have originated in south-east Asia, Indonesia, Papua New Guinea, the Malay peninsula and the Philippines. Traders took them west to India and the Arabic countries, and east into Polynesia. The earliest mention of bananas is from 600BC, in Buddhist scriptures, where Indian traders travelling through the region tasted bananas and took some home with them. Bananas are believed to have been introduced to Europe in the fourth century B.C., by Alexander the Great, after he tasted the fruit while invading present-day India.3

Bananas grow in bunches. Each bunch is made up of rows called ‘hands’, and each hand is made up of individual bananas, called ‘fingers’. The name ‘banana’ is believed to have come from the Arabic word for finger: ‘banan’.3

Bananas are known to be grown in 150 countries around the world, with more than 1,000 species known. Today, over 80% of the world’s bananas are grown in South America. The Cavendish banana (of the species of Musa acuminata), one of the most widely grown commercial species in Australia and USA, is under threat from an unstoppable fungal disease, known as Tropical Race 8. 4

Bananas can be eaten raw or cooked. They are one of the three most popular fruits in the world, along with apples and oranges. 4

Bananas are one of the oldest cultivated plants. Traditionally, all parts of the plants were used as medicine: flowers for bronchitis, dysentery and on ulcers; cooked flowers for diabetics, sap for cases of hysteria, epilepsy or leprosy; young leaves as a poultice for burns or skin problems; roots for digestive complaints. The leaves are known to contain antifungal and antibiotic benefits.6 Certainly when I was in the Philippines, bananas were recommended both for diarrhoea and for constipation. (Please remember, this article has not been written by a doctor, nutritionist or herbalist and is for general information only. Consult a medical professional before relying on bananas to supply your medicinal needs.)

Brisbane City Council7 describe four ways to use banana peels in your garden: as home-made fertiliser, non-toxic pest repellent, slow release fertiliser and as mulch. Like all vegetative matter, banana peels are also good in the composting system.

The plants themselves can be used as a windbreak, to provide shade or a privacy screen, or to make use grey water.8

HOW TO PROTECT BANANAS FROM SYDNEY WINTERS

The following steps on protecting bananas from the cold that occurs in parts of western Sydney, where temperatures can reach as low as -5°C, is taken from a Facebook post by ” Annette PSW Seedsaver” published in June 2020 and particularly relevant to this winter which is colder than the previous two years. The information is used with permission. For photos and more details, see the post on Facebook.

Wrapping banana trees against the cold is especially important for the growing tip of plants under three years old. If the winter is mild at your place, just wrap the whole plant, including the growing tip, in frost cloth (which can be bought at the big green hardware store). In areas where frosts are common, or the temperature often drops below freezing, it is three step process:

The PSW Seed Bank is closed for stock-take (1/6/2022-31/7/2022 )and will re-open 1 August with a bigger catalogue than seen previously. More than 20 varieties of lettuce, more than 40 varieties of tomato. Why not try something new in Spring this year?