Plant of the Month: Beets 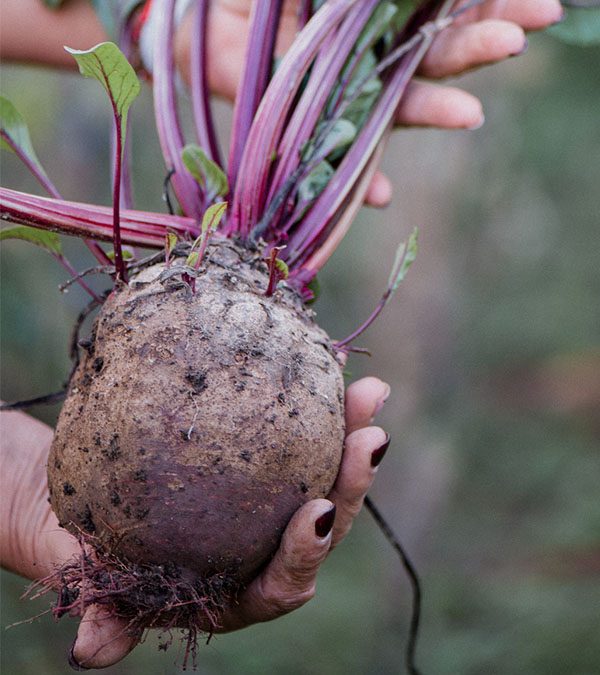 The beloved addition to Australia hamburgers is not just a root vegetable. The species that we call ‘beets’ includes plants grown for their roots, such as beetroot, sugar-beet and mangel wurzel, and plants grown for their leaves, such as silver-beet and chard. All of these plants are known by the same Latin name, Beta vulgaris. They belong to the same family of plants as Amaranth, but their flowers are far less showy.

Beets originate from the area around the Mediterranean.  They were first cultivated by the Ancient Greeks for the their leaves and used for eating and medicinally. The Ancient Romans took it one step further and started cultivating them for their roots as well.

By the beginning of the 16th century, beetroots were known throughout Europe. They were eaten for their leaves and their roots. Large roots, commonly called mangel or mangelwurzel, were traditionally grown as crop fodder. When they are young, they can be harvested and eaten as you would eat yellow beetroot. We find them to be quite sweet and delicious. Once they have reached a kilogram or more, they are way too tough for human consumption.

Sugar beet is a crop grown widely in America for sugar consumption, since most of the country is too cold for the production of sugarcane. Sugar beets grow quite large, we have found these roots palatable when they are small but way too sweet as a vegetable. They can grow well over 1 kg and are best eaten young. If you wish to try your hand at making sugar, it is best to grow the roots through to maturity.

DESCRIPTION OF PLANTS and SEEDS

Beets are biennial plants, meaning that they flower in the second year. The plants can be up to 1.5m tall by the time they reach seeding maturity. They will not flower until they have had at least 30 days of cool weather, less than 10°C. The flowers are covered by green bracts that look like leaves.  The seeds which are produced are sometimes called “goosefoot” because of their shape. The seeds are ‘multi-germ’ meaning that each little ‘capsule’ may contain more than one embryo or ‘germ’.

HOW TO GROW BEETS

Beets prefer cooler weather for growing and may bolt (run to seed) if the temperature gets higher than 30°C. It has been my experience that when bolting occurs in the first year, the seed produced is small and often non-viable.

Beets are sown in Spring, late Summer and Autumn; that is, in western Sydney, February-May, September to November. There a couple of varieties that can be sown all year round. If planting in October and November, place them on the eastern side of the house or give them protection from hot, afternoon sun.

Beet seeds are usually sown directly where they are to grow but beets, especially those grown for leaves, can handle being transplanted while they are small. Be careful not disturb the root when transplanting. For beginners, we always recommend starting small. Beets, with the exception of the giant root varieties, are easily grown in containers. Pots also have the advantage that they can be moved to where conditions are favourable, something not easily done with a garden bed! 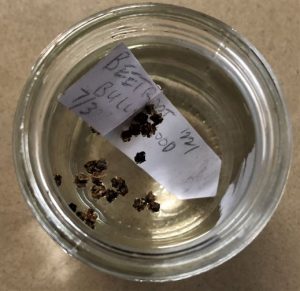 Beet is hard seed and needs to be soaked in warm water before sowing. Be careful not to use hot water, if you can’t put you finger in it and hold it there, the water is too hot!! Body temperature is good. The seed needs to soak for at least six hours, overnight is better. Put a plastic label with the seed details written on it (in pencil, ink will wash off) in the container with the seed, particularly if you are soaking more than one type of seed!! The seeds may float when you first put them in the water but they will sink as they absorb the liquid. After the seed has been soaked, any seed that is still floating is probably not viable but you can give it a try if you like!

Using a light and ‘fluffy’ seed raising mix, sow seed according to the packet instructions. If you don’t have a packet, then seed is generally planted around “twice the depth” of the seed. What does that mean exactly? Try this: drop a seed onto a flat surface. it will fall the way it would fall as if it had just fallen off the plant. Look at the seed – you sow it in soil at a depth no deeper than twice the depth of seed itself: that is, from the surface on which it is lying to the top of the seed.Remember: too shallow is way better than too deep!

Beet seeds germinate, in ideal conditions, in 7-10 days. Really fresh, strong seed may germinate more quickly. Older seed or those sowed in less than ideal conditions may take a little longer. If your seed has not germinated in 21 days, I’d recommend trying again, by following all the sowing instructions more carefully or with fresher seed.

You can prick out and pot on the seedlings when they have a minimum of four leaves, or when they are big enough for you to be confident in handling them. If they are very small, pot them into their own small containers. If it has at least six leaves, it can go straight into the garden.

Slugs and snails love fresh, young seedlings. We protect ours with a collar made from an old plastic pot covered with copper tape. We have found this to be the only effective way to keep slugs or snails away from our seedlings. Make sure the collar is partially buried into the soil so that it doesn’t blow away in strong winds or get kicked off by birds landing in your vegetable garden. This method also works for seedlings planted in pots.

Depending on what you are growing, harvest time (“maturity”), could be anything from 55 days (8 weeks) to 150 days (22 weeks). Leaf crops tend to come to maturity sooner than root crops. The leaves of beetroot and other beet root crops are edible. These can be harvested any time that you feel that they are big enough to handle. The younger the leaves, the sweeter and more tender they are. Large roots, such as sugar beet or mangelwurzel take the longest time.

Young beet leaves can be used fresh in salads. in fact, commercial salad mixes often have beetroot leaves in them; they are the oval-shaped leaves with the red veins. Older beetroot leaves, as well as those often incorrectly called ‘spinach’, that is, silverbeet and chard, can be cooked. Like all greens, they wilt down to much less than there appeared to be when you started with fresh leaves. For this reason I recommend cooking at least twice as much as you think you are going to need. Beet leaves can be added to stir fries at the end of the process, and they can be added whole, or torn into large pieces, to soups and stews in the last 5 minutes of the cooking time. They can be cooked whole then put through the food processor or smashed with a potato masher before being Incorporated into omelettes, quiche or other similar egg dishes.

Beet roots can be eaten fresh when young, they can be baked, boiled, steamed or even fried. They are also well-known as pickled vegetables, the kind we find on Australian hamburgers. Sugar beet roots can be eaten fresh or cooked as you would other beetroots, but I have found them to be way too sweet to use as a vegetable. Instead they are better grated and used in a recipe like carrot cake (use less sugar).

In traditional and folk medicine, beets have been used to treat a range of conditions, such as blood pressure, anaemia, digestive upsets and as an anti-inflammatory. I am not a medical practitioner nor am I a herbalist so I recommend that you research  further before using any type of food for medicinal reasons.

All beets, whether grown for the roots, like beetroot, or the leaves, like silverbeet, are the same species, Beta vulgaris. This is important to know because any plants which are the same species can be cross-pollinated. Beets are pollinated by wind. if you have plants of different varieties growing in the same garden, and they come into flower at the same time, you need to protect one from being cross pollinated by the other If you want to collect seed that will grow “true-to-type”. I do this by cutting the flowers spikes off the one that flowers second, so that the one that is in flower first can continue to be pollinated. It is much easier for beets to be pollinated if you have more than one plant of the same variety.

Beet seeds are available in the Autumn 2022 Seed Catalogue (prices listed are to current, financial PSW members only)