Plant of the Month – Comfrey

Comfrey is called a weed in many places. However, it is some times referred to, by ‘permie’ ‘practitioners, as “the permaculture plant”.  It can be used in many ways, in the garden as fertiliser, mulch or as a weed suppressor or inhibitor; as a compost activator, as fodder and in herbal remedies. So, what is it? What are the benefits to growing comfrey? What should those who grow it be aware of? Is it really worth the “trouble? This article will look at some of the pros and cons of growing comfrey and give you the basics to make a decision for yourself.

Comfrey is a fast-growing, herbaceous perennial. In colder climates, it may disappear for the winter then come back to life again in Spring. It has a thick, expansive root system, with a large tap root which, in some varieties, will grow two or three metres into the soil. Each comfrey plant can grow up to 1.2 metres wide. The plant has large, hairy leaves and pink, blue or white flowers in late spring. Originally from Asia and Europe, there are around 25 varieties, most are self-seeding. It has been widely cultivated and used for nearly 2,500 years as a fertiliser, medicinal plant and as fodder.

As its common name, “knitbone”, suggests, it was widely used in traditional medicine. Pulverised leaves, mixed with hot water, were made into a poultice and applied to the body on breaks, wounds, sprains, burns, arthritis, etc. As a tea, it was used as a blood coagulant, often for menstrual pain, a treatment for ulcers and a treatment of maladies of the lungs.

While I have used comfrey in a poultice myself without any ill-effect that I’m aware of, the plant does contain chemicals that can be absorbed through the skin and which may cause liver damage, cancer or death.  It is not recommended for use on broken or damaged skin, by pregnant or breast-feeding women, or for those with liver disease of any kind.

So, is comfrey really “the permaculture plant?

Comfrey can be used for animal feed in small quantities only – the toxic chemicals that caused comfrey to be temporarily banned in Australia and New Zealand for a short period of time (7 Dec 2015-1 March 2016) can affect animals. Chickens, typically, won’t eat fresh leaves (which are covered in silica) but if the leaves are cut and wilted for a day or two, they will. Comfrey is a great source of protein and is lower in fibre than grass. Introduce very small amounts and increase slowly — but keep the percentage of comfrey in their total diet very small. (Disclaimer: I am not a vet so please research comfrey yourself before feeding it to your animals. The information I have presented here comes from this site among others).

Comfrey is known as a “dynamic accumulator”. The long tap root “mines” the soil deep down, below the root zone of other plants, and brings up minerals that those plants can’t reach. Of course, those minerals must be present for the roots to access them; it is not such a ‘wonder’ plant that it can manufacture minerals itself. It is also worth noting that while the plant is alive and the leaves are still attached to the plant, comfrey keeps all that nutrient abundance to itself!

However, even an unpruned plant has beneficial uses: its large leaves shade the soil, discouraging weeds from growing. The thick mass of roots can be used around the edges of guilds or garden beds to keep other species out. Your lawn, for example, will not invade your garden bed if there is a hedge of comfrey between them.

There are several ways to use the benefits of comfrey’s accumulation:

a word about flowers and seeds 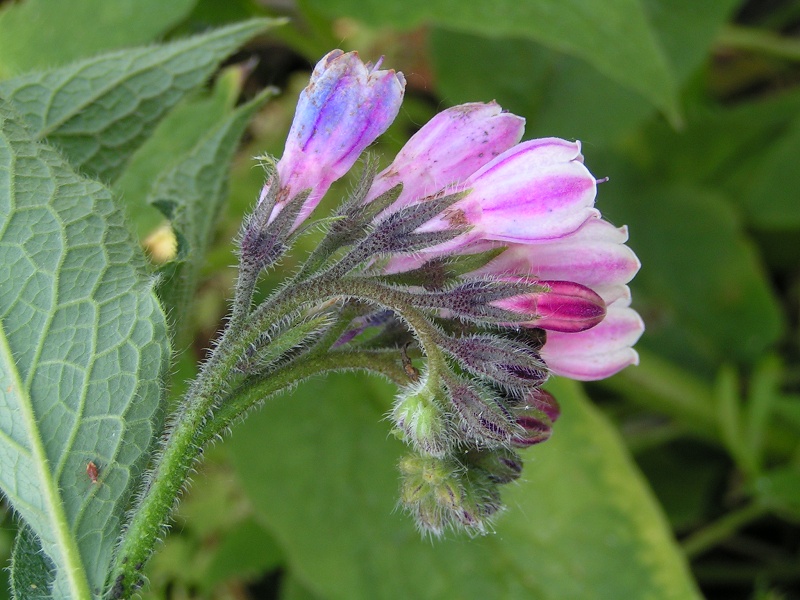 When it is in flower in late spring to early summer, comfrey, which is related to borage, attracts bees and other beneficial insects. However, be warned: many types of comfrey self seed freely, and they may invade other parts of your garden or the local bush. There are several ways to deal with this:

I’ll leave the final word to Tim, of Pig in the Mud Permaculture in New Zealand; quoted from his permaculture journal, “The Sacred Groves of Aotearoa”, journal entry 2, 2015

“There’s a paddock not far from the orchard that’s covered in row upon row of comfrey.  The soil in that paddock is some of the best soil I’ve ever seen.  It’s the colour of dark chocolate and it’s teeming with life.  It’s soft, friable and it smells like well-matured compost. I now know, after working with comfrey for some time, that these are the tell-tale signs of a well-established comfrey plot. Comfrey is good for your soil!”

Comfrey is good for your soil and that’s what it’s all about!

PS If you have Russian comfrey, could you please save some seed and donate it to the PSW Seed Bank.
We’re completely out!
Thanks
Lynne (PSW SeedSavers)