Plant of the Month: Purslane 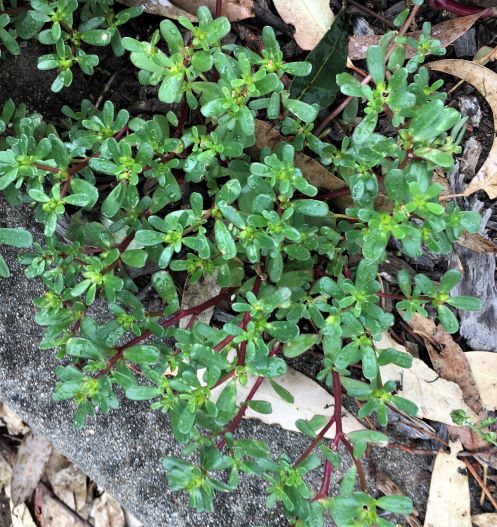 Purslane (Portulaca oleracea), commonly called pigweed, is an annual ‘weed’ in season during summer and into autumn. It is a succulent plant, containing 93% water, with red stems and small, green teardrop-shaped leaves. The taste is a little sour, a little salty.1

The leaves can be used fresh as lettuce or cooked as spinach. The plant is nutrient dense and low in calories; a good source of Vitamin A and Vitamin C, and the minerals Magnesium, Manganese, Potassium, Iron and Calcium, and small traces of other nutrients.1

Purslane was, apparently, a favourite food of Ghandi and, as far back as the first century of the Common Era, Pliny the Elder knew of its nutritious properties.2

The plant grows in many soil types but is a often found growing in poor, dry soils. We have very small plants in our vegetable garden, just two or three leaves. They will, of course, grow larger if we allow them to do so.

Out on the verge of the neighbouring bush property, it is sprawling plant of about 30cm high (as seen in the top photo). Purslane can reach 40cm and cover quite a bit of ground. Harvest purslane before it develops flowers because it is called a “weed” for good reason!

I love the crisp texture of the leaves as a foil for softer textures in a green salad.

There is one plant that grows in the same season and might be mistaken for purslane. It is spurge, which is easily distinguished: pick a leaf, break it open – if it exudes white sap it is NOT purslane. Spurge is not edible and ingesting it may end in serious diarrhoea and vomiting, or a trip to the emergency room.3

Disclaimer: The nutrition facts in this post come from an article on healthline.com. Please be sensible and try a small sample, just one or two leaves, then wait 24 hours before consuming the leaves in quantity. It is written for general information and entertainment purposes only.

REFERENCES
1 Purslane – A Tasty “Weed” That is Loaded With Nutrients (Healthline)
2 Purslane: mystical, medicinal and rampant in the suburbs of Australia (ABC)
3 How to Identify Purslane – Foraging for Wild Edible Weeds (Good Life Revival)