Plant of the Month: Cape Gooseberry 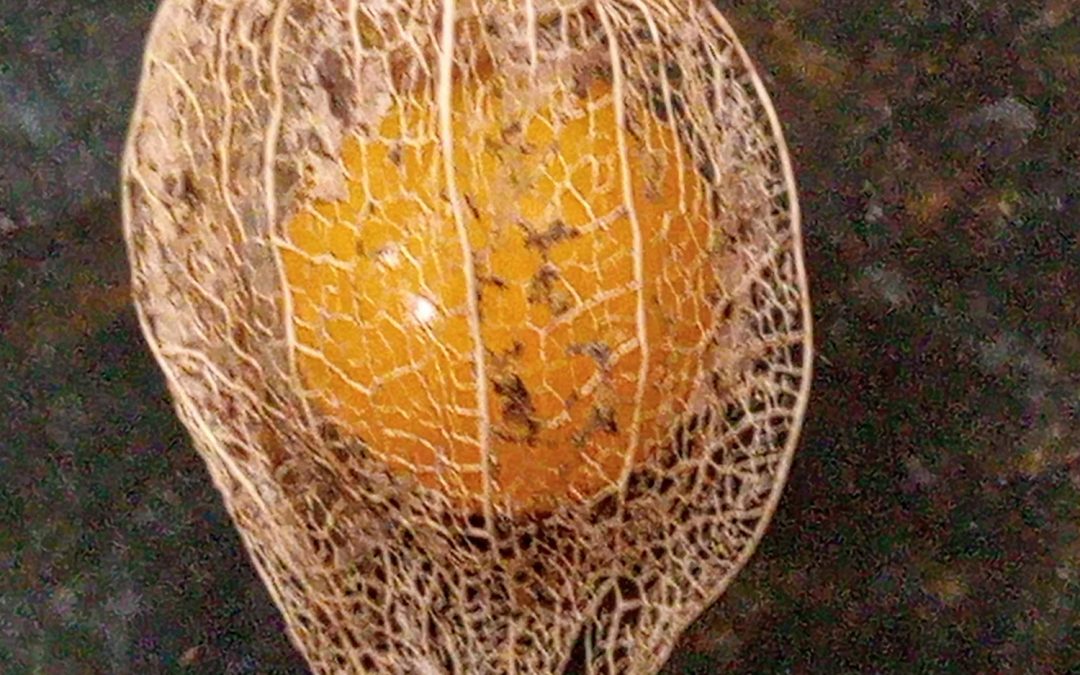 What is that strange looking fruit? It looks like a little paper lantern!

This is ‘Cape Gooseberry’, also know as ‘Peruvian Ground Cherry’, ‘Golden Berry’ or ‘Aztec Berry’. Sometimes, in USA, it is marketed as ‘Pichuberry’. It comes from South America, around Peru, Ecuador and Columbia.

A less well-known name is ‘husk tomato’. It is, in fact, related to tomatoes, potatoes, chillies, capsicums and some common weeds, like ‘wild tobacco’ ,‘blackberry nightshade’ and ‘devil’s apple (also known as ‘apple of Sodom’). Its relationship to tomatoes is easily seen in the shape of the seeds.

The Latin name of this delicious perennial fruit plant is is Physalis peruviana. It is, however, frost tender and may die off in winter in parts of western Sydney. However, it self seeds readily so may seem like a perennial because new plants come up where the old one was growing.

It is easy to grow once established and, except for the occasional white fly (and slugs when young), we have found it has few pests or diseases. It does need some managing, it can become a sprawling plant (much like an untrained tomato), and will take over a large area if allowed. It can be trained to grow on a trellis, fence or even over a shed. It fruits quite happily in part shade; in winter our plant gets just two hours direct sun a day! The fruit, which ripens in late Winter and Spring, stores well on the kitchen bench; there is no need to refrigerate.

When ripe, the fruit tends to fall off the bush and can be found quite easily because the husks ripen from green to a golden yellow or brown colour. Sometimes the immature fruit falls and, if eaten, can be very tart indeed. We let them ripen on the kitchen bench until the husks are a golden brown colour.

The fruit, which grows inside those papery ‘lanterns’ is delicious, being both sweet and slightly tart. It can be eaten fresh, on its own or in a fruit salad. It can also be used in desserts or preserved in jams or chutneys.

HOW AND WHERE TO GROWN CAPE GOOSEBERRY

Choose your location carefully – the plant will be there for a number of years. It will be need fertile, well drained soil and a position that is in the shade on summer afternoons. You can train it on a trellis or fence or just put a ‘cage’ around it. It will root from nodes on the stems so any part that touches the ground can potentially grow roots. That process when done deliberately is called ‘layering’. Once it has taken hold and the roots are established, the ‘new’ plant can often be successfully separated from the parent plant and given away or grown elsewhere.

New plants can also be struck from cuttings or grown from seed sown in Spring after frosts (September to November) or March (in frost free areas only). The seeds are tiny and can take several weeks to germinate. The recommended distance to plant them is 50cm apart – we have only one bush and it takes up much more space than that!

Seeds are available from our Spring Catalogue: https://seedsavers.permaculturesydneywest.com.au/