Plant of the Month: Marigolds 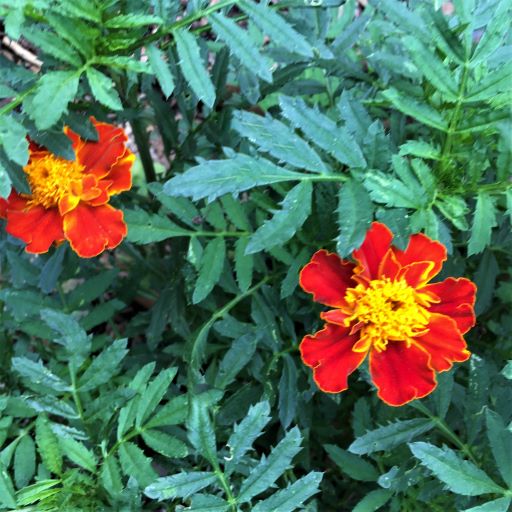 Inchworm, Inchworm, measuring the marigolds, seems to me you’d stop and see how beautiful they are!

So sang Danny Kaye in the 1952 movie, Hans Christian Anderson. Marigolds are not only beautiful flowers, they also very useful plants in the edible or ornamental garden. In this article, when I refer to “marigold”, I am speaking of plants of the Tagetes species. However, in some parts of the world, the plant we know as Calendula is also called ‘”marigold”.1

Although some varieties of marigold are commonly called “French Marigold” or “African Marigold”, both of these species originated in Central America, in Mexico and Guatemala,2 They are warm climate plants and yet surprisingly hardy in Western Sydney’s erratic climate.

The plants were introduced into Europe by the Spaniards in the 16th century. British plantsmen found plants growing on the north coast of Africa where they had naturalised. This is may be the reason why these tall plants are called “African marigolds”.2

The common name, Marigold, is believed to have originated from altars in Catholic Europe where the plants were placed around statues of Mary. The colour of the flower led to it being called “Mary’s gold”, hence Marigold. 2

For most of my life, my experience of marigolds had been the ‘dwarf’ types; but marigolds come in different sizes.

The ease with which marigold plants grow from seeds, and their habit of self-seeding in the right environment, made them popular as garden species. Plant breeders were quick to begin experimenting with new varieties.

Marigolds have been a popular edible flower since ancient times.1 The petals make a bright addition to salad.3 French Marigold, Tagetes patula, and African Marigold, Tagetes erecta, have a pungent odour4 and taste that some would say is unpleasant. Mexican Mint Marigold, Tagetes lucida, has a tarragon-like flavour; while Tagetes tenufolia, the Lemon Marigold, has a more citrus-y tang.4 Some marigold flowers can be used to flavour drinks.5, 6

Dried marigold flowers have been used as a food colouring or as “poor man’s saffron”.5

In Chile and Argentina, the dried leaves of Tagetes minuta, the Peruvian Wild Marigold, also known as “Huacatay”, have been used as a flavouring for centuries.6

WARNING: Not all varieties of Marigold are edible so do further research before ingesting any part of the plant.4

In traditional medicine, marigolds were used internally to treat “indigestion, colic, constipation, coughs and dysentery. Externally it was used to treat sore eyes and rheumatism.” 5, 6 The leaves were harvested fresh; while the flowers were often collected and dried for later use.5

The flowers of marigolds can be used to dye natural fabrics and yarns.5, 7 A lot of flowers are needed for the dyeing process.8

The leaves of marigolds are said to be toxic to cockroaches.5

Marigolds flower for a long period, particularly if dead-headed regularly. The bright colours look stunning in the garden or even in a pot. However, the benefits if marigolds to the garden goes way beyond their good looks.

Marigolds are great companion plants. The flowers are attractive to a range of beneficial insects. The scent of marigolds may disguise the scent of brassicas, thus confusing the cabbage white butterfly. The substances excreted by marigold roots can help suppress weeds. Grown near tomatoes, they are said to repel white fly.10

In our experience, French Marigolds have been inefficient in this task. To save space and make harvesting easier, we grow our tomatoes vertically on one leader. this way, they can grow up to 3 m in height. Whitefly tends to congregate in the leaves towards the top of the plans. The short French Marigolds have no effect on whiteflies from this distance. If we had the space, we would grow the taller African or Aztec Marigold between each tomato plant. However, since each African Marigold grows 80-100 cm wide, this would take up a lot of space in our vegetable garden. We are content to let the whiteflies be and allow other natural predators to deal with them.

Marigold also claimed to deter root-knot nematodes in the soil.10 This may be true, but logic says that it only works around the root zone of the plant. The root-knot nematodes are happy and growing and doing their thing away from the roots of the marigolds. A better way to do this is to grow the Marigold plant for about 3-4 months (when these secretions are produced5, 7), then cut it down and dig the whole plant into the soil.11

Some varieties of Marigold are better than others for this purpose, and the Peruvian Wild Marigold, also called “Huacatay”, Tagetes minuta, is perfect for this purpose11. The Latin name ‘minuta‘ refers to its tiny flowers so it is not grown as a showy ornamental, but as a background plant, where its two-metre height is put to good use!

WARNING: Tagetes minuta exudes a sap when cut that may be irritating or cause dermatitis in sensitive people.9

HOW TO GROW MARIGOLDS

Many Marigolds come from tropical climates where they get plenty of moisture but the soil is generally nutrient-poor. Too much nitrogen in the soil can lead to lots of leaves and few flowers. A moist, well-draining soil in full sun is ideal. We have grown marigolds in part-shade but they tend to grow leggy rather than bushy, are slower to reach maturity and produce less flowers. Marigolds, especially the smaller varieties, can be grown in containers. Keep plants well-watered in dry weather, especially those in pots or raised beds.

Marigolds are easy to grow from seed (and will freely seed in your garden if allowed). You can raise seedlings or sow directly where you want them to grow. Sow the seeds 5-6mm deep. Germination should occur in 7-14 days; and as little as 4-7 days if the soil temperature is between 24-28°C. You will need to protect young seedlings from slugs and snails. The spacing between plants varies depending on the type, so consult you seed packet for your particular variety. Different varieties take different lengths of time to reach maturity, but 80-100 days (12-14 weeks) is average.

Marigolds have a long flowering season, particularly if they are dead-headed regularly. Flowers can be cut for indoor use; this helps prolong the flowering season as well as providing bright colour indoors.

MARIGOLDS IN THE PSW SEEDBANK (your seedbank)

The new catalogue (Spring 2022) goes live at !:01am, Monday 1 August.
Please note: seeds are for the use of PSW members only. Please do not order if you are not a member, your order cannot be filled until your membership is paid.
Thank you.

DISCLAIMER
This article is for gardening information and general interest only. Being neither a herbalist or qualified medical practitioner, I cannot give any medical advice on the use of marigolds, internally or externally. Readers of this article must do their own research before using marigolds for any purpose other than as a garden plant.